There has been a significant amount of discussion and work (People Service, XFN, and FOAF to name a few) around the concept of managing personal or social relationships. These relationships are managed from a user-centric perspective and are really a one-to-many relationship between the user and the identities being managed. This allows the identity of the user to be implied in regards to the other identities and groups (e.g. it is my buddy list). The group structure provides a form of role classification that can then be leveraged for permissions and access control among other things. 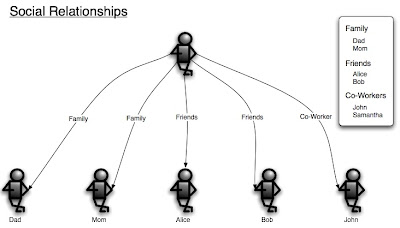 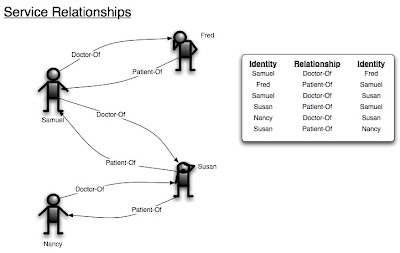 Where social relationships tend to be defined in a uni-directional manner (from the user to the other identity), service based relationships are often bi-directional. I don't see this as a problem as it is rather easy to model and implement. However, it is important to distinguish between these two kinds of relationships.

So in the US we started daylight savings time (DST) three weeks early. I'm sure most of you received the wonderful emails from the IT department that outlook entries would be tenuous for the weeks between March 11 and April 1. I figured I'd just have a few meetings that were messed up and nothing major.

However, after returning from a Liberty Alliance TEG meeting in Ipswich, UK, I got a rude awakening. I did the normal airport procedures and paid my parking fee in the terminal using the "pay-and-go" ticket I had received when entering the parking lot 7 days earlier. The parking receipt is below. Notice that the payment time is 16:25pm. 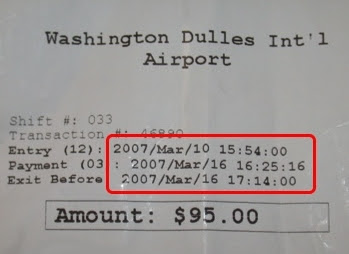 I then walked to Daily Garage 1 (about 5-8 minutes), put my stuff in my car and proceeded to the parking lot exit. Normally, you just put in your ticket and it raises the gate and off you go. Not so this time. I received a screen on the monitor stating that the "grace period" (the time between paying in the terminal and exiting the parking lot; around 45 minutes) had expired and I needed to pay and additional $5 or press the button to speak with someone over the intercom. Without thinking, I just put in my credit card and paid the $5. The receipt for that is below. 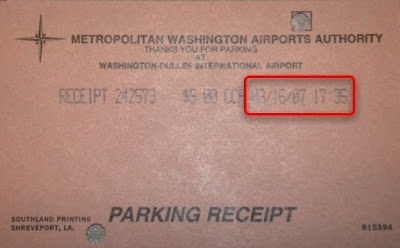 Then as I was driving home (in the surprise snow/sleet/ice/rain) I realized that there was no way my approximately 10 minutes between paying in the terminal and exiting the parking lot could have been more than the grace period allowed. The time in the machines must be off. This turns out to be the case. The time on the second receipt is 17:35pm which should be 16:35pm. I'm guessing the machines in the parking lot initially didn't adjust so they were adjusted manually. Then a "software update" came through and adjusted the times again.

Unfortunately, I have no excuse as to why I didn't think this through before paying :(
Posted by George Fletcher at 2:40 PM No comments:

Email ThisBlogThis!Share to TwitterShare to FacebookShare to Pinterest
Labels: DST

So earlier this month I described a method that would simplify provisioning a user's identity credentials to a mobile application. This method will work but requires the application provider (e.g. an Instant Messaging service) to be able to send a binary SMS message to the phone to configure the application with the necessary credentials.

This model keeps the interactions between the mobile operator host services and external application providers. It also makes it much easier for users to configure their applications because they don't have to enter their credentials into the phone itself. A win-win.

Update: In my rush to post this entry I was remiss in pointing out that this solution was discussed over lunch at a Liberty Alliance interim TEG meeting. The other principals in the discussion were Fulup Ar Foll and Alvaro Armenteros.
Posted by George Fletcher at 10:14 AM 4 comments:

When phishers get lazy

So I received this email at one of my email accounts this week. It's not nearly so clever as the one pointed out by Conor here. What I found interesting is that I don't use that email account with eBay and I've never sold anything on eBay. So naturally I was suspicious. I suppose it's just easier for the phishers to swamp the "market" rather than do their homework.

Hmm... I wonder if all those PowerSeller ratings are real? 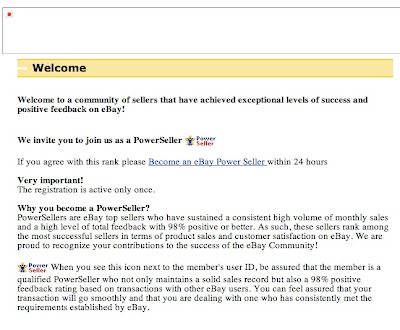 Tags: Phishing, eBay
Posted by George Fletcher at 9:36 AM No comments:

Do we really want SSO?

With the recent flurry of announcements around OpenID the same SSO issues are once again being raised. Kevin Farham documents some of these in his piece on OpenID. Kevin's friend's issues are not around OpenID but rather the whole concept of Single-Sign-On (SSO).

This begs the question, "Do users really want SSO?" Unfortunately, the perception might be scarier than the reality.

Well... yes and no (depending on the implementation). However, the reality is that many users have the same password at all/most their sites and so the "hacker" can already get access to all their sites without SSO.

With a good Identity Provider (IdP) and strong authentication, the user should be more secure even though a single authentication event allows access to many sites. In fact, for many users, they expect this within a "proprietary" or "closed" environment ( AOL, Google, Yahoo, MSN, etc). It's extending this SSO concept beyond the "proprietary" environment that "scares" them.

Of course part of the issue is that this kind of "cross-domain" SSO doesn't really exist in the general consumer space. The unknown always breads fear; it's human nature. To overcome this "fear", we need SSO to be common place (known not unknown), and show how SSO is "just-as-secure" as the "money under the mattress" solution.

In his blog entry "Social Engineering" Paul Madsen describes the classic "parental control" problem where the children understand the technology better than the parents:) However, this doesn't have to be the case. I can think of a number of simple solutions.

In my household, all members have their own OS user account (yes, including my 3 1/2 yr old daughter who dutifully types in her password to sign on). This works out great for them and simplifies my life as I don't have to deal with changed desktops pictures, dock apps appearing/disappearing (yes it's a Mac), etc. I highly recommend setting up OS user accounts for individuals (there can be a family one as well if necessary). On the parental control front at the very least it allows you to turn off Administrator rights for certain accounts.

Getting back to a solution.... Once signed in to my OS user account, I could click a widget/gadget/desktop-thingy to generate an assertion to my PS2 or other device authorizing the suspension of parental controls. I suppose that the PS2 could support something like Cardspace, but that seems a little overkill. Remembering the OS account password is not too difficult and should provide the necessary level of assurance as to the subject of the assertion.

Then again, a simple USB fob with appropriate credentials would work as well. Now where did I put that "key" for the TiVo.

Tags: Identity, Parental Controls
Posted by George Fletcher at 11:52 AM No comments:

Not to long ago I decided to try and set up the instant messaging client on my cell phone. I dutifully went through the painful process of entering my authentication credentials (loginid and password). However, when I got to my password, I couldn't find one of the characters in my password using the phone character entry system. This was rather frustrating and I gave up using the instant messaging client for a while. Later I tried a different account where I knew I could find the characters for the password and the mobile application worked.

This got me thinking that there has to be a better way to provision the identity to the phone for use with mobile applications. One possible process flow would be...

This should all be doable with today's technology. Of course, the next step would be secure provisioning of multiple identities for the device, where the identities are consumable by multiple applications. For this, the Advanced Client work underway in the Liberty Alliance should help.