While attending DIDW (ok, this is a little late for a DIDW blog entry) I heard an interesting presentation by Michael Barrett CISO of PayPal. One of his concerns is that we are getting more and more identity standards rather than fewer. In some senses we are fracturing the market rather than uniting it even though most agree that identity is critical to the success of the web and services going forward.

I've been feeling for a while that we have enough protocols to satisfy the different use cases that exist and many that will come up in the future. What we don't have is a way to use what exists as standards across a wide range of disparate deployments. This causes confusion for users and lots of work for developers. There is also the "I'll wait and see" affect in the industry as companies wait to see which "protocol" will "win".

However, getting something that covers 50% to 80% of the use cases approved as a standard and adopted is rather a long process. So what about just some simple conventions that would allow existing protocols, services, and deployments to work together? In the past I've talked about both HTML markup on the RP web site as well as specifying the user's IdP in an HTTP header via an identity agent on the user's device.

Here is another. What about a simple transform on an email address to construct an URI that can then be put through the "Discovering an XRDS document from an http(s) URL" process? This would be another way to determine the IdP in an RP initiated authentication event. This could be something like take alice@example.com and transform it to http(s)://services.example.com/idp. I'm not particular to the transform itself, just that there be a way to convert an email address into a URI than can be commonly processed to determine the IdP endpoint(s) and supported protocol(s).

YAIDO - Yet Another IdP Discovery Option

In reading through Eve Maler's slides from this year's XML Summer School, she describes the standard IdP discovery problem for an RP initiated authentication event. One of the standard options is "Client tells RP". Putting this together with the proposal by Laurent Michel on the OpenID lists regarding mobile use of OpenIDs, why not just use the convention of an HTTP header to describe the user's IdP? (I suspect this has been proposed before. Feel free to add a comment stating so). This HTTP header would not have to be sent with every request, because the identity agent could detect when an RP needed it from some additional simple HTML markup.

The RP could then do a XRDS (XRI resolution v2.0 section 6) based discovery on the presented URI from the HTTP header. This would allow the IdP to expose multiple services and protocols via a simple XRDS file. The RP would then just pick the the appropriate protocol and endpoint from the XRDS file and start the RP initiated authentication process.

One danger with this kind of a "push" mechanism is that over an untrusted channel the user is susceptible to MIT attacks. With a smart client and SSL I believe this is better than the cookie mechanism. For OpenID it's probably better to take the seatbelt and sxipper approach of just posting the user's OpenID to the OpenID login form. However, for a protocol like SAML2, identifying the IdP in this kind of a manner should improve the user experience.

I'm here in Tokyo for a Liberty Alliance meeting of the Technical Expert Group. This noon we had a "pick-up" soccer (football to the rest of the world) game. Not being in the best shape our TEG co-chair made quick work of our challenges on the field:) 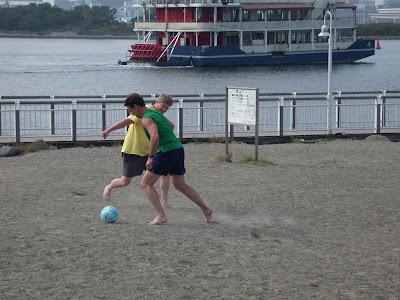 Here are some less incriminating pictures from the event. 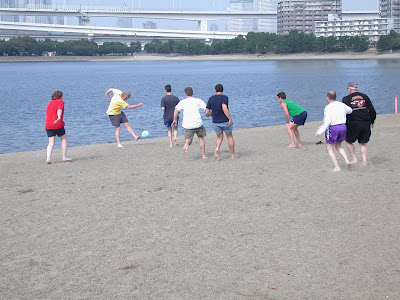 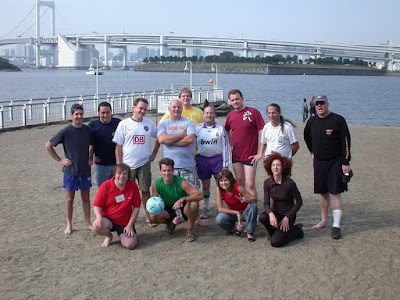 Many thanks to Mikko Laukkanen for taking the pictures.

Tags: Liberty Alliance, TEG, Soccer
Posted by George Fletcher at 3:13 AM No comments:

Blessings of an early flight home 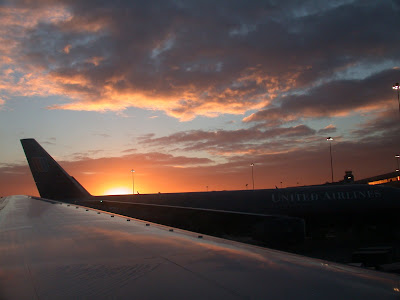 Posted by George Fletcher at 1:25 AM No comments: